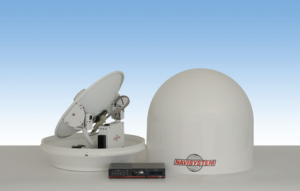 Technology means making difficult things easy. In fact, Navisystem has been building marine satellite antennas since 1993 with cutting-edge techniques and with unique characteristics all over the world.

Our antennas are not only automatic, but can also work in “manual” mode with Navisystem’s unique instrumental pointing system. This mode allows you to receive the signal without tracking even when it is weak. An automatic only antenna, on the other hand, searches for the signal without being able to lock it and does not allow viewing of the decoder programs. A weak signal may be due to obstacles between the antenna and the satellite, adverse weather conditions, or we are far from the center of the transmission beam.

Our TV antennas also allow the reception of Digital Terrestrial with geographic pointing, an exclusive Navisystem function, not available in other products on the market.

The installation of the antennas is very simple and fast: all cables have “Plug and Play” connectors and allow you to complete the installation in a few minutes.

The reception of TV channels is also possible with our VSAT systems .

The NT1-3 line is dedicated to small boats and includes parabolas from 48 cm to 65 cm in diameter. The small-sized Sat 48 control unit allows the programming of 3 satellites and the connection of up to 3 decoders.

The NT line consists of antennas from 48 to 95 cm in diameter. The Sat 103 control unit allows the programming of 12 satellites and the connection of multiple decoders.

The HT line consists of a very wide range of models, with dishes from 55 to 135 cm. The Sat 105 control unit, with digital display for controlling all functions, allows the programming of 12 satellites and the connection of multiple decoders.

The HT WW line has the same characteristics as the HT line but allows the vision of satellite channels all over the world thanks to the double linear and circular polarization.

The HT4 line includes a wide range of models, with dishes from 55 to 240 cm. It has the same characteristics as the HT line but guarantees greater stability and resistance even with very rough seas thanks to the 4-axis stabilization system.

The SK line stands out for its maximum ease of installation, no control unit, Navisystem App for controlling the 12 programmable satellites from a Smartphone or Tablet. Automatic and manual system. 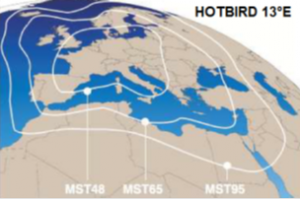 A fundamental aspect to consider when choosing the satellite system to install is the size of the dish. To ensure the best compromise between antenna performance and boat size, it is important to choose the right size of the dish and the radome that encloses it. The names of the Navisystem models contain the indication of the size of the dish expressed in centimeters, for example the MST 55 model is characterized by a dish of 55 cm in diameter.

However, the size of the dish must also be chosen according to the navigation areas and satellites to be received. In fact, each satellite has its own coverage area which also depends on the size of the dish used. For example, the Rai, Mediaset and Sky Italia channels are broadcast by the Hotbird satellite (with position 13 ° East), whose coverage is shown in the image.

For information on the coverage of the various satellites you can consult the following sites: